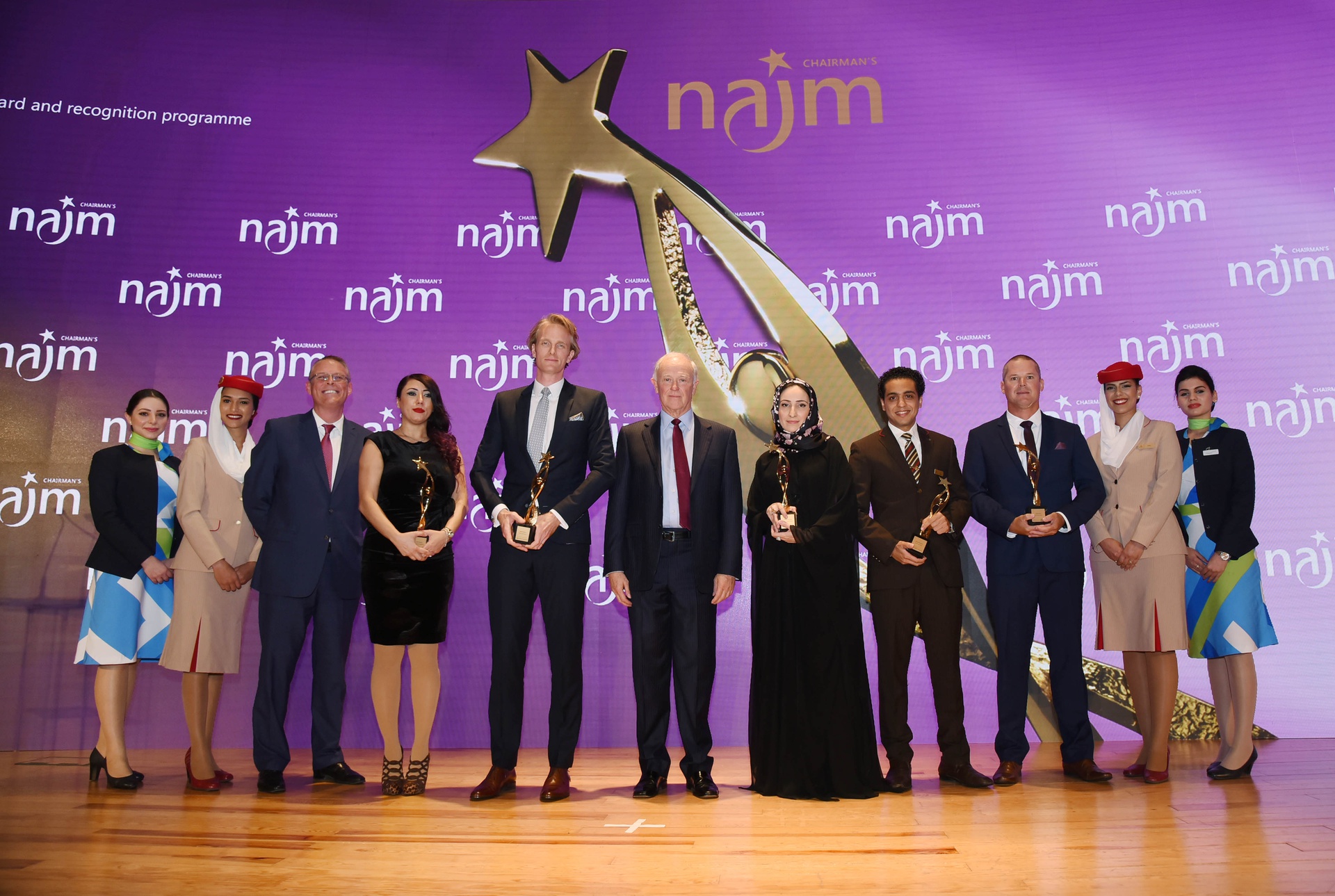 DUBAI, U.A.E. – 1 February 2018 – The Emirates Group today honoured its top employees for their extraordinary commitment to excellence, performance, and service.

The ‘Najm Chairman’s Awards’ ceremony took place at Emirates’ Group Headquarters, and was presented Sir Tim Clark, President Emirates Airline on behalf of His Highness Sheikh Ahmed bin Saeed Al-Maktoum, Chairman and Chief Executive of Emirates Airline & Group. Colleagues, families and friends of this year’s winners also gathered to support and cheer on their loved ones and colleagues.

HH Sheikh Ahmed said: “Every year, we come together to celebrate the outstanding achievements of our employees. Their hard work, tenacity, compassion, and continued pursuit of excellence are vital to the success of Emirates and dnata, and I congratulate them for their brilliant performance and contributions. Whether individually or collectively, we firmly believe that the most outstanding contributors who have gone beyond expectations should be recognised and rewarded.”

Click here to watch the highlights of the Najm Awards ceremony.

Najm, means ‘star’ in Arabic, and is the Emirates Group’s rewards and recognition system that recognises employees for their commitment to excellence and innovation. This is the 11th edition of the annual Chairman’s award, which has seen more than 70 employees recognised for individual and collective achievements within the Emirates Group. Award nominations run through a rigorous review, selection and voting process by heads of departments and members of the senior executive team.

The Najm Chairman’s Award 2017/2018 winners were recognised for a range of outstanding achievements, from saving lives and providing support in difficult situations, to creating innovative business solutions.

Giles Peter Daniel Birch, First Officer (Airbus), Emirates Flight Operations, won the Najm Chairman’s Award for his work on a project to reduce usage and maintenance costs for A380 auxiliary power units (APUs). Auxiliary Power Units are gas turbine engines used during aircraft ground operations to provide power for engines, electricity, air-conditioning and other aircraft systems. Giles found a way to cool the aircraft by improving equipment performance and reducing wastage in a practical, innovative and scientific manner, devoting much of his own personal time to implement the project. These initiatives implemented under Giles's leadership have already yielded millions of dirhams in fuel cost savings.

Gavin Keyes, Ramp Agent, dnata International-Australia, was awarded the Najm Chairman’s Award for his quick and prompt action which averted a potential crash on the ground that could have resulted in injuries to employees and serious damage to an aircraft. Early one morning, as an aircraft turnaround was in progress at Sydney Airport, Gavin noticed that an unattended ramp tug was speeding towards an aircraft and two employees. A tug was left on its own while a driver was collecting safety cones, unaware that one of the cones had fallen onto the vehicle accelerator, setting it into motion. Gavin immediately pulled one of the employees to safety and jumped onto the moving tug, taking control of it. He steered the tug, jammed the brakes and was able to stop it only centimetres away from the engine of the aircraft.

Eissam Mostafa Mohamed Ouf, Cabin Crew member, was awarded the Najm Chairman’s award for his lightning speed reaction that saved a baby’s life onboard. Eissam was carrying out the meal service on a flight from London Heathrow when he suddenly heard a commotion. A baby had started choking and had fallen unconscious. Realising a life-threatening emergency, Eissam instantly took hold of the baby and administered back slaps and chest thrusts. The baby regained consciousness and the object in its throat was dislodged. His quick thinking and correct administration of first aid saved the baby’s life.

Fadila Bachiri, Department Officer, dnata Airport Operations was also awarded the Najm Chairman’s Award for her life saving actions. When a passenger in the Concourse D lounge choked on a piece of candy, Fadila made an impromptu decision not to wait for the medical team and rushed to apply first aid immediately. After five attempts, she managed to get the blockage out of the passenger’s throat and clear his airway. Apart from averting a potential death, Fadila also helped to calm the passenger’s distressed wife.

Khadija Arsanova, Customer Service Manager, dnata Travel Services, was recognised with the Najm Chairman’s Award for her exceptional customer service. Khadija helped two Emirates Holiday customers who had suffered a severe accident while on a safari and buggy ride with a company that was not part of the Emirates Group. Khadija became their constant point of contact during the tragic time. Khadija put herself in the customers’ and families’ situation and helped them throughout their ordeal, going above and beyond what was expected of her in the call of duty.